I just love the mixing of mystery, romance, and food. 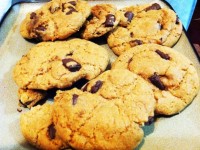 Hallmark Movies & Mysteries announces the start of production on its latest mystery movie series debut, “Murder She Baked: A Chocolate Chip Cookie Murder Mystery,” a Hallmark Movies & Mysteries Original World Premiere Sunday, May 10 (9pm ET/PT, 8C). The mouthwatering new mystery stars actress and TV host Alison Sweeney (“Days of Our Lives”), alongside Daytime Emmy nominated star Cameron Mathison (“All My Children”) and “Debbie Macomber’s Cedar Cove” darling Barbara Niven.  The film centers on free spirit Hannah Swensen, an expert baker who becomes a culinary detective when her shop, the Cookie Jar, becomes the scene of a crime, just as she is caught in a romantic mystery of her own.  “Murder She Baked: A Chocolate Chip Cookie Murder Mystery,” is based on the New York Times bestselling book Chocolate Chip Cookie Murder by Joanne Fluke.

This freshly baked new murder mystery introduces Hannah Swensen (Sweeney), a creative and bubbly baker extraordinaire in a sleepy town in Minnesota, where everyone knows each other and secrets don’t stay hidden for long.  Hannah’s bakeshop, the Cookie Jar, is where much of the town’s gossip percolates along with the strong coffee.  But after she finds her good friend and delivery driver shot dead in the alley behind her shop, Hannah’s idyllic world is turned upside down.  Her brother-in-law and county deputy sheriff recruits Hannah to help him chase down the culprit, but newly appointed Detective Mike Kingston (Mathison) has other ideas on how to investigate.  As Hannah gets close to the handsome detective, she also meets the town’s new resident dentist at the prodding of her matchmaking mother Delores (Niven), and is suddenly caught in an unexpected romantic mystery of her own.  Then, as a surprising number of suspects emerge, and motives ranging from blackmail to extortion abound, Hannah is strategically placed in the investigation to hear all as she jumps in as detective.  Packed with plot twists and red herrings, romantic entanglements and family shenanigans, this lighthearted Hannah Swensen crime solver will please the palate of any mystery fan.