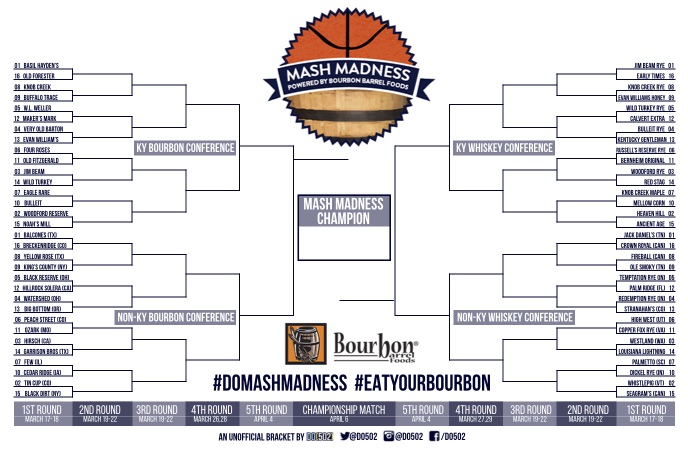 CLICK HERE FOR EVERYTHING MASH MADNESS OR VISIT FACEBOOK TO ENTER
Mash Madness is a public NCAA March Madness style bracket showdown that will follow the Men’s tournament, but with a Do502 twist. Mash Madness breaks competitors out into four conferences – Kentucky Bourbon, Non-Kentucky Bourbon, Kentucky Whiskey, and Non-Kentucky Whiskey. Voting begins today, on Selection Sunday at 5pm EDT and will run through all rounds until a Mash Madness 2015 Champion is crowned! The Bracket will be updated as the games – and the voting – continues. Do502 will crown a Mash Madness National Champion on April 6, 2015!
Mash Madness is powered by Bourbon Barrel Foods.
For more information about Do502 visit http://do502.com/p/about-faq.
Stay donnected to Do502 via Facebook, Twitter, and Instagram or register for Do502 (HERE).