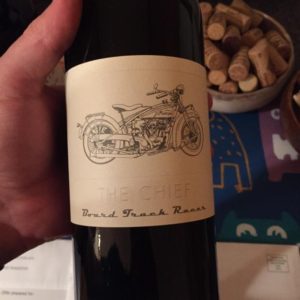 SEATTLE, February 1, 2018 — Mark McNeilly is excited to announce that he’s opening a new tasting room in Woodinville, this time dedicated to his Board Track Racer line of Washington wines. Located at 19501 144th Ave F-900 in Woodinville’s Warehouse District, the tasting room will open its doors on Saturday, February 24 at 12pm.

Board Track Racer Cellars, one of Mark Ryan Winery’s sister projects, produced its first vintage in 2008 and is named for the wild wood track motorcycle races of the 1920s. The labels for all the wines are inspired by the same era, with great motorcycle-centric graphics—McNeilly is a big fan of vintage motorcycles and the freewheeling spirit they convey.

The current Board Track Racer wines are:

With inviting gray walls, blond wood, and a communal table for 12, the Board Track Racer tasting room will have a relaxed, motorcycle and rock-n-roll vibe, like the Mark Ryan tasting room. The space has a glass garage door that will offer guests a peek into barrel storage that is shared with neighboring wineries. Capacity is about 85 making the tasting a great option for private events too.

“The Board Track Racers wines are wonderfully accessible both in taste and price point,” says McNeilly. “I’m thrilled to have a second Woodinville venue to share the wines!”

The tasting room will be open Saturdays and Sundays from 12pm – 6pm, pouring tastes of the Board Track Racer wines, as well as select bottles from both Megan Anne Cellars and Mark Ryan Winery on rotation. For more information, call 425.481.7070.

Established in 1999 by Mark Ryan McNeilly, Mark Ryan Winery is an acclaimed Washington winery based in Woodinville, just north of Seattle. A largely self-taught winemaker, the first vintages were crushed and produced in garages of friends and family—in the years since, the winery has grown in size, earning respect and acclaim from wine lovers and critics alike along the way. The goal has always been to make delicious wines that stand as true representations of the vineyard from which they come. For more information, visit www.markryanwinery.com.