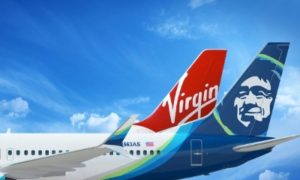 Alaska Air Group, Inc. (NYSE: ALK), parent company of Alaska Airlines, and Virgin America, Inc. (NASDAQ: VA) today announced that their boards of directors have unanimously approved a definitive merger agreement, under which Alaska Air Group will acquire Virgin America for $57.00 per share in cash. Including existing Virgin America indebtedness and capitalized aircraft operating leases, the aggregate transaction value is approximately $4.0 billion. With an expanded West Coast presence, a larger customer base, and an enhanced platform for growth, Alaska Airlines will be positioned to provide more choices for customers, increase competition and deliver attractive returns to investors.

The combination expands Alaska Airlines’ existing footprint in California, bolsters its platform for growth and strengthens the company as a competitor to the four largest U.S. airlines. Combining Alaska Airlines’ well-established core markets in the Pacific Northwest and the state of Alaska with Virgin America’s strong foundation in California will make Alaska Airlines the go-to airline for the more than 175,000 daily fliers in and out of Golden State airports, including San Francisco and Los Angeles.

“Our employees have worked hard to earn the deep loyalty of customers in the Pacific Northwest and Alaska, while the Virgin America team has done the same in California. Together we will continue to deliver what customers tell us they want: low fares, unmatched reliability and outstanding customer service,” said Brad Tilden, chairman and CEO of Alaska Air Group. “With our expanded network and strong presence in California, we’ll offer customers more attractive flight options for nonstop travel. We look forward to bringing together two incredible groups of employees to build on the successes they have achieved as standalone companies to make us an even stronger competitor nationally.”

David Cush, Virgin America president and CEO said, “Our mission has always been to create an airline that people love – and we accomplished that while changing the industry for the better. Joining forces with Alaska Airlines will ensure that our mission lives on, and that the stronger, combined company will continue to be a great place to work and an airline that focuses on an outstanding travel experience.”

“Today’s merger announcement of two great airlines coming together provides both pilot groups with an outstanding opportunity to benefit from the growth of the expanded Alaska Airlines’ route network,” said CaptainChris Notaro, chairman of the Alaska Airlines MEC of the Air Line Pilots Association. “We would like to welcome the professional pilots of Virgin America to the Alaska family and we look forward to a common goal of building a new joint pilot group that will benefit from a stronger and more prosperous airline that we have helped build.”

“Alaska Airlines and Virgin America are both known for providing an exceptional in-flight experience, thanks in large part to the dedication of our respective flight attendants,” said Jeffrey Peterson, president of the Association of Flight Attendants-CWA Master Executive Council at Alaska Airlines. “The combination of these two award-winning airlines provides an exciting opportunity for our members and for the Virgin America flight attendants, or Inflight Team Members. We look forward to joining together and building on our legacies of customer satisfaction to the benefit of both companies’ passengers.”

A Larger Network, More Choices and an Enhanced Mileage Plan

The transaction brings together two airlines that consistently earn customer admiration and the highest industry accolades:

The combined airline will retain its safety-centric, employee-focused culture:

Together, the combined airline will have:

Following closing, Alaska Airlines will welcome Virgin America Elevate loyalty program members into its Mileage Plan, ranked #1 by U.S. News and World Report. With Alaska Airlines Mileage Plan, members are able to redeem award miles for travel to more than 900 destinations worldwide, rivaling global alliances. Until the transaction closes, both loyalty programs will remain distinct – with no short-term impact on members. Upon closing, the programs will be merged. Alaska Airlines is committed to ensuring that loyalty members of both airlines maintain the same high-value rewards they’ve come to enjoy in both programs – with access to an even larger network.

Under the terms of the agreement, Alaska Air Group will acquire Virgin America for $57.00 per share in cash, representing a total equity value of $2.6 billion. The combined company expects to achieve $225 million annually in total net synergies at full integration. One-time integration costs are expected to be between $300-350 million. The combined airline is projected to have annual revenues of more than $7 billion. Alaska Air Group expects the transaction to be accretive to adjusted earnings per share in the first full year, excluding integration costs.

The transaction builds on both companies’ strong financial performance. In 2015, Alaska Air Group achieved a record full-year adjusted net income of $842 million, which increased 47 percent over 2014. Alaska Airlines also grew passenger revenues by 5 percent year-over-year, and has increased dividend payments 175 percent since initiation in 2013. In 2015, Alaska Airlines added 20 new markets and 10 new cities to its growing network and 11 new aircraft. As of March 31, 2016, Alaska Airlines had $1.6 billion in unrestricted cash and short-term investments.

Since its successful IPO in 2014, Virgin America has reached a number of milestones, most recently reporting a record annual year-over-year net income of $201 million, an increase of 139 percent in FY 2015, the highest in company history. In 2015, Virgin America also outperformed the industry in domestic unit revenue growth and began growing the airline with 10 new aircraft deliveries.

The combined organization will be based in Seattle under the leadership of Tilden and his senior leadership team, who collectively have nearly 15 decades of combined airline industry experience. Until receiving regulatory approval to close, Tilden and Cush will co-lead a transition team, which will develop a specific integration plan.

The merger, which has been approved unanimously by the boards of directors of both companies, is conditioned on receipt of regulatory clearance, approval by Virgin America shareholders and satisfaction of other customary closing conditions. The companies expect to complete the transaction with regulators’ approval no later than Jan. 1, 2017.

Additional details about the transaction, including multimedia assets, are posted at www.FlyingBetterTogether.com and include:

Executives from Alaska Airlines and Virgin America will host a call for the investment community and media today at 5:30 a.m. Pacific time/8:30 a.m. Eastern time to discuss the transaction. To access the conference call, please dial 1-800-300-0356, referencing conference ID # 82998792. A slide presentation and the live audio webcast will be available and archived on the investor relations section of the Alaska Air Group website approximately one hour after the call concludes.

Known for its mood-lit cabins, three beautifully designed classes of service and innovative fleetwide amenities — like touch-screen personal entertainment, WiFi and power outlets at every seat, Virgin America has earned a host of awards since launching in 2007 — including being named the “Best U.S. Airline” in Condé Nast Traveler’s Readers’ Choice Awards years and “Best Domestic Airline” in Travel + Leisure’s World’s Best Awards for the past eight consecutive years. For information, visit www.virginamerica.com.

Additional Information About the Merger and Where to Find It

This communication may be deemed to be solicitation material in respect of the merger of Virgin America with a wholly owned subsidiary of Alaska Air Group. Virgin America intends to file relevant materials with the Securities and Exchange Commission (the “SEC”), including a proxy statement in preliminary and definitive form, in connection with the solicitation of proxies for the merger. The definitive proxy statement will contain important information about the proposed merger and related matters. BEFORE MAKING A VOTING DECISION, STOCKHOLDERS OF VIRGIN AMERICA ARE URGED TO READ THE DEFINITIVE PROXY STATEMENT AND OTHER RELEVANT MATERIALS CAREFULLY AND IN THEIR ENTIRETY WHEN THEY BECOME AVAILABLE BECAUSE THEY WILL CONTAIN IMPORTANT INFORMATION ABOUT VIRGIN AMERICA AND THE MERGER. Stockholders will be able to obtain copies of the proxy statement and other relevant materials (when they become available) and any other documents filed by Virgin America with the SEC for no charge at the SEC’s website atwww.sec.gov. In addition, stockholders will be able to obtain free copies of the proxy statement from Virgin America by contacting Virgin America’s Investor Relations Department by telephone at (650) 762-7000, by mail to Virgin America Inc., Attention: Investor Relations Department, 555 Airport Boulevard, Burlingame, California94010, or by going to Virgin America’s Investor Relations page on its corporate website athttp://ir.virginamerica.com.

Participants in the Solicitation