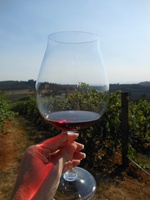 Willamette Valley Vineyards, the winery that made U.S. history conducting the first successful, federal Regulation A public stock offering, is doing it again. The company is offering a preferred stock providing wine enthusiasts special winery access and preferred pricing on wines, as well as a cumulative 5.3% dividend at its initial $4.15 share price. The registration statement relating to this offering became effective on August 11, 2015. An order of registration also has been issued by the Oregon Department of Consumer and Business Services, Division of Finance and Corporate Securities, and by the Washington Department of Financial Institutions. The stock is now being offered to residents of those states to help fund and accelerate the construction of two new small Oregon wineries within the recently announced Oregon Estate Vineyards portfolio, as further described in the prospectus identified below. Willamette Valley Vineyards wines have also garnered accolades from the leading wine publications Wine Spectator, Wine Enthusiast and Wine Advocate. In 2011, Wine & Spirits Magazine named the winery to its Top 100 Wineries list.

Willamette Valley Vineyards has established a minimum purchase of 300 shares at $4.15 or $1,245, and a maximum of 1,205 shares for $5,000.75. Winery founder, Jim Bernau, wanted the investment amount to be within reach of many wine enthusiasts with an upper limit to make sure the stock was not bought in large blocks, restricting the number who could participate. A total of 1,445,783 shares of preferred stock has been registered with the SEC and the company plans to raise up to six million dollars in this transaction. An investment in their securities involves risks, and persons should not invest without reading in their entirety the prospectus and the documents incorporated by reference therein, particularly including the section entitled “Risk Factors.” To obtain more information regarding the winery and an investment call 1-800-344-9463 or visit www.wvv.com/ownership.

Willamette Valley Vineyards built its original winery in 1989 by conducting a self-underwritten public offering of common stock under the Federal Regulation A, which was at the time a new, streamlined securities registration process for small companies with a $1.5 million funding maximum. In 1994, the winery was admitted to the NASDAQ where its common stock is traded under the symbol WVVI. Prospective investors should note that the preferred stock now being offered will not be listed, and presently is not eligible for listing on the Nasdaq.

The strategy of combining its capital needs with its market has worked for the winery in assembling more than 5,000 shareholders of record, many of whom are also devoted customers and brand ambassadors.

Bernau explains the company prefers this non-traditional approach to build its two planned boutique wineries: “Many wine enthusiasts want to share in the dream and success of building a winery but few have the time and money to do it. By acting collectively, together we have built a word class winery in Oregon and contributed to the growth of the industry. Now we are working to do it again to curate very high quality wine experiences at two special sites.”

Oregon Estate Vineyards, a new division of the company, will build two small production wineries on company owned land in the Eola Hills and Walla Walla American Viticultural Areas (AVAs). Winery Director Christine Collier remarks, “These two sites are among the best for growing what each location does best — Pinot Noir and Chardonnay on the eastern slope of the Eola Hills and Cabernet Sauvignon in SeVein above the acclaimed Seven Hills Vineyard.”

The winery has publicly reported its financial progress every quarter and year demonstrating its belief that the nascent Oregon wine industry could grow into a serious business building considerable value in its communities and for shareholders. This success has afforded Willamette Valley Vineyards an opportunity to contribute to important charitable causes such as ¡Salud!, a collaborative program between 40 vintners and Tuality Healthcare which provides vineyard worker healthcare. In 2014, Bernau received the Los Heros de ¡Salud! Award for the winery’s service to the program and lead gift which helped fund the mobile medical unit.

Willamette Valley Vineyards, Inc., has filed a registration statement (including a prospectus) with the SEC for the offering to which this communication relates. Before persons invest, they should read the prospectus in that registration statement and other documents the company has filed with the SEC for more complete information about the company and this offering. Persons may get these documents for free by visiting EDGAR on the SEC Web site at www.sec.gov. Alternatively, you many obtain a copy of these documents at www.wvv.com/ownership, or the winery will arrange to send the prospectus (including the documents incorporated therein by reference) if requested by writing to stock.offering@wvv.com or by calling 1-800-344-9463.

About Willamette Valley Vineyards Established in 1983 by winegrower and Oregon native Jim Bernau, Willamette Valley Vineyards has collaboratively grown through partnerships like the merger with Bill Fuller of Tualatin Vineyards (est. 1973) and later with the O’Briens for Elton Vineyard. Bernau’s vision of organizing the support of wine enthusiasts to grow world-class wines through shared ownership has resulted in over 5,000 owners. Oregon Estate Vineyards represents the company’s new effort dedicated to establishing small estate wineries at some of Oregon’s most intriguing vineyard sites, starting with Elton in the Eola-Amity Hills AVA and Pambrun in the Walla Walla Valley AVA. www.wvv.com
SOURCE Willamette Valley Vineyards