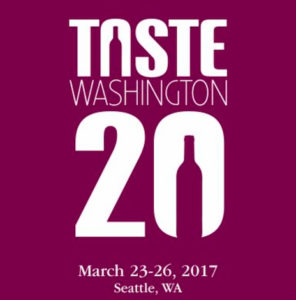 Guests can watch culinary mastery in action, get tips and ask questions at hourly chef demonstrations from 2:00 p.m. to 5:30 p.m. Grand Tasting hours have been extended by a half hour for both days of this year’s event, and VIP ticket holders can show up early for an extra hour of tasting.

“The Grand Tasting showcases more than 225 wineries and 65 restaurants and is truly the centerpiece of Taste Washington. After getting better acquainted with the local food and wine industry at the Red & White Party, The New Vintage, and On the Farm, guests can watch how different celebrity chefs and winemakers bring everything together,” said Ali Daniels, Vice President of Marketing at Visit Seattle. “Being immersed in a chef’s cooking process and culinary vision isn’t just entertaining – it also gives everyone a greater appreciation for Pacific Northwest cuisine and our local resources.”

Chef Kristen Kish has become a household name in the Emerald City after winning Bravo’s Season 10 of “Top Chef” in Seattle. She has also appeared as a co-host of “36 Hours” on the Travel Channel. Born in South Korea and adopted into a family in Michigan, Kish’s culinary roots began early. She attended culinary school at Le Cordon Bleu in Chicago and has worked as Chef de Cuisine in high-profile restaurants, including Chef Guy Martin’s Sensing and Chef Barbara Lynch’s Stir and Menton restaurants. Kish is now traveling the world and working on her cookbook.

Nicknamed “The Seafood Maverick,” Chef Chad White of Sea Rocket Bistro has been recognized as one of San Diego’s best seafood chefs. Influenced by his love of Mexico, White has opened restaurants on both sides of the U.S. southern border: La Justina in Tijuana and Craft Pizza Company and Común Kitchen & Tavern in San Diego. He has appeared on the Travel Channel’s “Bizarre Foods with Andrew Zimmern” and was also a contestant on Bravo’s “Top Chef” Season 13. In summer 2016, Chef White opened a ceviche bar Zona Blaca in his hometown of Spokane, Washington.

Chef Jason Stratton is General Manager at Mamnoon in Seattle’s Capitol Hill neighborhood. He began his culinary career at Seattle’s Le Gourmand restaurant at the age of 16. In 2002, Stratton served as line cook and sous chef at Café Juanita, followed by a six-month sabbatical to Granada, Spain. After his return, Stratton served as co-chef at Poppy and then joined Spinasse in 2009, where he was named one of Food & Wine magazine’s “10 Best New Chefs for 2010.” Chef Stratton opened Artusi and Aragona, a James Beard semifinalist for “Best New Restaurant” in 2014.

An aficionado of Asian cuisines and flavors, Chef Gregory Gourdet serves as Culinary Director for Departure Restaurants, with locations in Portland and Cherry Creek, Colorado. For his national efforts promoting Oregon bounty, Gourdet was named “Chef of the Year” by the Oregon Department of Agriculture in 2013. He was also semi-finalist for the James Beard Award for Best Chef Northwest 2015. Gourdet appeared on Bravo’s “Top Chef” Season 12, where he was named runner-up for the title. With a health-oriented culinary mindset, Gourdet offers gluten free, vegan and paleo menus to guests at Departure.

To get everyone in the flavorful spirit, Taste Washington welcomes back Seattle’s Chef Thierry Rautureau of Luc and Loulay Kitchen and Bar as Emcee. Trademarked “Chef in the Hat,” Chef Rautureau has been featured on shows such as Bravo’s “Top Chef” and “Top Chef Masters.” For a taste of his foodie knowledge and enthusiasm, tune into the “Seattle Kitchen Show” on KIRO 97.3FM.

For the month of December only, get $20 off Sunday tickets to the 20th Anniversary of Taste Washington’s Grand Tasting event with the code 20TASTE. It’s also the time to be among the first to purchase “The Connoisseur” pass, brand new this year, which guarantees VIP access to all of the festival’s signature events.

Images for Taste Washington can be found here: http://tastewashington.org/media/image-gallery/.

About Washington State Wine:
Washington State Wine represents every licensed winery and wine grape grower in Washington State. Guided by an appointed board, WSW provides a marketing platform to raise positive awareness of the Washington State wine industry and generate greater demand for its wines. Funded almost entirely by the industry through assessments based on grape and wine sales, WSW is a state government agency, established by the legislature in 1987. To learn more, visit www.washingtonwine.org.

About Alaska:
Alaska Airlines, together with its regional partners, flies 32 million customers a year to more than 110 cities with an average of 970 daily flights throughout the United States, Canada, Costa Rica, Mexico and soon Cuba. With Alaska’s global airline partners, customers can earn and redeem miles to more than 800 destinations worldwide. Onboard, customers are invited to make the most of their flight with amenities like power outlets at every seat, streaming entertainment direct to their device, Wi-Fi and an inspired food and beverage selection featured on most flights. Alaska Airlines ranked “Highest in Customer Satisfaction Among Traditional Carriers in North America” in the J.D. Power North American Airline Satisfaction Study for nine consecutive years from 2008 to 2016. Alaska Airlines Mileage Plan also ranked “Highest in Customer Satisfaction with Airline Loyalty Rewards Programs” in the J.D. Power Airline Loyalty/Rewards Program Satisfaction Report for the last three consecutive years. Alaska Airlines is a subsidiary of Alaska Air Group (NYSE: ALK). Learn more on the airline’s newsroom, blog, alaskaair.com, @AlaskaAir, Facebook and LinkedIn.