Go on a Wine Adventure this Holiday Season 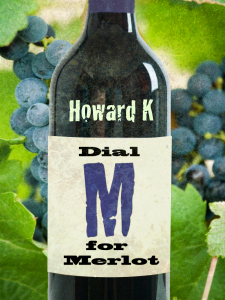 There’s nothing wrong with liking what you like, but you can’t discover new favorites unless you try new things, says wine enthusiast Howard Kleinfeld.

While recovering from throat cancer, Kleinfeld, an award-winning commercial music producer, lost his sense of taste for a few years. When it came back, he decided to embrace some of the finest tastes life had to offer and has since traveled the world to satisfy his obsession with wine.

“I became someone who decided to say ‘yes’ to many of the things I used to say ‘no’ to, which has enriched my life tremendously with adventure,” says Kleinfeld, author (as Howard K) of “Dial M for Merlot,” www.DialMForMerlot.com, a lighthearted novel imbued with its character’s passion for wine.

“But you don’t have to book a trip to Napa or the Bordeaux region of France. You just have to be willing to try a new type of wine.”

Wine has grown increasingly popular in America in recent decades. The preference of just one in four in 1992, it’s now the alcoholic beverage of choice for 35 percent of us, which is just one percent less than beer, according to a 2013 Gallup poll.

“With all the holiday parties and family gatherings, it’s a great time of year to expand one’s ‘Wine-Q’,” says Kleinfeld, who offers the following suggestions.

•  If you like white zinfandel, consider a Riesling.
White zin is the “Kool-Aid of wine.” It can be a good introduction to the wonderful world of wine because it’s sweet, and everybody likes sugar. But there are a number of wines at many price points that are also sweet and carry a much more interesting profile — a fuller body, honey and pear or apple notes and much more. Riesling and Gewürztraminer wines are a great place to start.

Fun fact: red zinfandel hails from the same grape as white zinfandel, except the red variety includes the grape’s skin – white does not. The skin gives the wine a more robust flavor and color than its popular cousin, deep, rich and full of zest. It’s quite different from white zin, but worth investigating with a curious palate.

•  If your go-to white wine is strictly Chardonnay, try a bottle of white from the Côtes du Rhône or a sauvignon blanc from just about anywhere.
Wine can be confusing because varieties may refer to a grape, a region or both. Chardonnay refers to a specific green-skinned grape and is grown all over the world, most notably in Burgundy, France. Côtes du Rhône is from the region of France of the same name and is usually made from a blend of grapes, none of which, by the way, are chardonnay.

Chardonnay is very popular and, it is said, a rite-of-passage grape for wineries. While Chardonnay is a relatively straightforward selection, Côtes du Rhône offers white and red varieties that will be fun crowd-pleasers at parties, and it’s inexpensive. An export grape from the region is Syrah, remarkable for its now-global prevalence, from Washington state to South America to South Africa to Australia, where it’s called Shiraz. For something completely different and light, try sauvignon blanc, which can be herbal and tart , with good acidity and complexity.

“Sauvignon blanc can be like drinking passion fruit – not quite orange, cherry or lemon – just passion fruit,” he says. “I’ll never forget one time I had it with tuna sashimi. It was such a perfect pairing…These are the things that make life great

•  If you like Moscato before dinner, try Sauternes or port wine with dessert.
Again, sweet wines are popular, but Sauternes from the region of Bordeaux with the same name, has a distinct flavor because of a unique geographical attribute. Sauternes is made from Sémillon, Sauvignon blanc, and Muscadelle grapes that have been affected by a fungus that usually causes souring. But, thanks to the weather in the Sauternes region, the fungus instead adds sweetness and complexity to wine. Varieties range from very sweet to dry as a bone. Port, Portuguese fortified wine, and Sauternes are amazing with nuts, blue cheese and foie gras, or goose liver pâté, slathered on baguette, Kleinfeld says.

•  If you think it’s time to outgrow merlot … try another merlot.
Ever since the movie “Sideways,” merlot has gotten a bad rap. Yes, some varieties can be fruit bombs (and there’s nothing wrong with that!), but others are deep, rich and structured. On a wide range of levels, merlot can provide  a nuanced and rewarding experience.

“Don’t be afraid to drink merlot just because you may have heard it’s not hip,” says Kleinfeld. “It can stand on its own and is also a big-time blending grape in some of the world’s most famous wines. It’s the king of the ‘right bank’ region of Bordeaux.”