Penfolds, Australia’s leading winemaker, and GQ Magazine, the premier men’s magazine for style and culture, are excited to announce the winner of this year’s “Best Dressed Somm.” Chef Sommelier Kyle Ridington from Piora Restaurant in New York City was awarded the coveted style title at an exclusive reception held at the Penfolds House 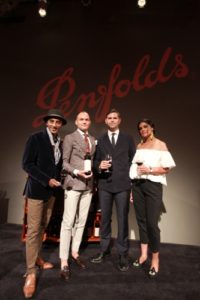 After a month long search on Instagram and Twitter, over 100 participating sommeliers across North America were evaluated on the ability to curate a look that exudes “effortless style.” Kyle impressed an esteemed panel of judges that included GQ Executive Stylist Brett Fahlgren, celebrity chef and style guru Marcus Samuelsson, and designer Rachel Roy – all of whom know firsthand that a fine wine is best paired with unparalleled style.

“I am honored to be named this year’s Best Dressed Somm by Penfolds and GQ,” said Kyle at last night’s reception. “It’s exciting to celebrate putting my best self forward when it comes to style. For the recognition to come from Penfolds, a brand known for its prestige and high caliber wines, solidifies the hard work I’ve put into my career and life.”

As one of five #BestDressedSomm finalists, Kyle, who to the reception wore cropped, tailored trousers and a fitted blazer finished with a green scarf, demonstrated his keen knack for fashion over front-runners Taylor Grant from Scopa Italian Roots in Los Angeles, Nico Snyman from Joel Robuchon at the Mansion in Las Vegas, Matt Bostick from Osteria Mozza in Los Angeles, and Elphin Murren fromKingside Restaurant in New York City.

“This year marks the second annual collaboration with Penfolds to pay homage to the sommelier community and we couldn’t be more excited about the evolution of the Best Dressed Somm program,” said Brett Fahlgren, GQ’s Executive Stylist. “All top contenders demonstrated their ability to curate a collection beyond the wine cellar. We especially loved Kyle because of his confidence in pulling off a completely original look.”

An evening of style and luxury held at the Penfolds House in New York, the Best Dressed Somm reception also served as the official U.S. debut of the Penfolds 2015 Collection, including the 2011 Grange – Penfolds’ flagship and one of the most collected wines in the world.

“Grange is distinguished for its lively and assured palate,” said DLynn Proctor, Penfolds U.S. Winemaking Ambassador. “This wine is unique in its expert craftsmanship – a synergistic trait reflected in the flair and contemporary attitude Kyle demonstrated firsthand last night.”

In addition to national publicity as Penfolds & GQ Magazine’s “Best Dressed Somm” of 2015, Kyle will be featured in an upcoming issue of GQ, as well as receive a private styling session with Brett Fahlgren. For more information, please visitPenfolds.com/GQBestDressedSomm. Follow the conversation on social media with @Penfolds, @GQMagazine and @GQ using #BestDressedSomm.

About Penfolds:
Penfolds has been producing an impressive array of wines since 1844 and indisputably led the development of Australian fine wine into the modern era. The introduction of Penfolds Grange in 1951 forever changed the landscape of Australian fine wine. Since then a series of standout wines, both white and red, have been released under the Penfolds masthead.

About GQ:
GQ is the leading men’s general-interest magazine, with a monthly readership of 7 million readers. It is available in print, online atGQ.com, and as an app at iTunes.com. The magazine is published by Conde Nast, a division of Advance Publications. Conde Nastoperates in twenty-five countries and is the world leader in exceptional content creation.