Can a chewable that contains Japanese Raisin and Prickly Pear help you recover a bit more quickly the night after a few drinks? I felt a difference one morning after I took Zaca. I took two chewables after my first glass of wine and two more after my last glass. They are similar to the chewable vitamins you took as a kid. I did drink a glass of water with both lots of chewables. I think these would be great for travelling when you get run down or a night out when you might overindulge. 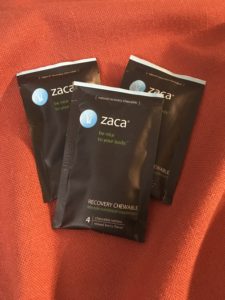 The Japanese Raisin they boast is the key is used in Chinese medicine with the disclaimer that this is not been evaluated by the FDA.  From Zaca’s web site: “Used in Traditional Chinese Medicine (TCM) for over a millennium as a detoxifying agent for alcohol. It also helps to cool the body which helps to combat the heat alcohol creates, and it has anti-fatigue effects. Don’t let these chewables be an excuse to drink more but to help you get going faster in the morning.